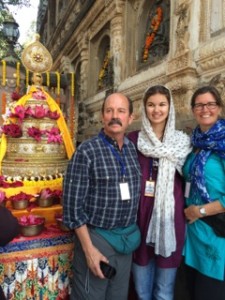 , Emily and I arrived in New Delhi, India to the continuous, chaotic din of horns blaring, honking, beeping. No need to stay in your lane, no use looking over your shoulder to change lanes, just honk to let people know. Roads are un-orderly, like a race – who can squeeze in front first and that includes, bicycles with 3 people, motorcycles with more, tuk tuk’s (small 3 wheeled contraptions), cars and trucks, cows of course and, dogs. On a trip from Rajgir to Sarnath, on the grand trunk road, we ran into some traffic. Our driver actually crossed the median into oncoming traffic, drove a mile or two, then crossed back ahead of most of the traffic! Wow! Despite the seeming disarray and confusion, noise and bustle, it seems to work! Everything in a flowing field of humanity! 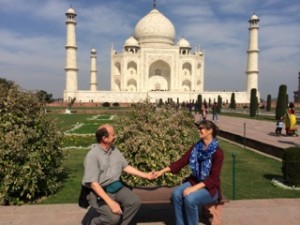 From Delhi, we zipped to Agra to see the magnificent Taj Mahal. It is resplendent; white marble against a blue sky, mathematically exquisite, deeply moving, luminescent, to see and feel in person.

Then, a crazy long train ride to Gaya, and arrived in Bodh Gaya to 10,000 monks, nuns and people on pilgrimage to the Nyingma Monlam World Peace Ceremony. Here’s a video that you might enjoy. 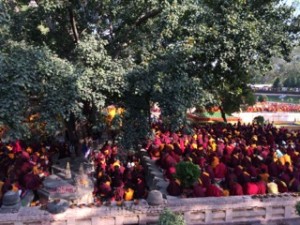 This ceremony was begun by Tarthang Tulku Rinpoche 25 years ago. It’s a sea of maroon and yellow robes and endless shining bald heads surrounding the Bodhi Tree and Mahabodhi Stupa, where the Buddha was enlightened. Flowers in geometric patterns in front of Tibetan texts to be distributed, bowls of water with rose petals and marigolds, intricate colorful sculptures made of butter, rooms of candles burning as an offering. We were there to support this ceremony by assisting in placing flowers in hundreds of brass bowls, making monetary offerings to each and every monk and nun, folding prayer scarves, pouring water at a special Mandala offering of rice, flowers and water. Beggar offering was midmorning, feeding rice, dahl and potato curry to hundreds of beggars each day. Then, major book donation distribution; about 500,000 Tibetan Texts were donated to 3,000 monasteries, all produced in Cazadero, California and sent in shipping containers to India! This was the 25th year of this particular ceremony. Millions of books have been donated to support the preservation of Tibetan culture.

After this ceremony, we had the fortune to visit several caves where the Buddha meditated, to Vulture Peak where he taught and several beautiful temples in Bihar, India.

On to Varanasi, on the Ganges River, a most sacred and ancient city where Hindu’s believe it is auspicious to die. It has so many people and is so dirty that it is difficult to describe. We took a boat ride on the Ganges to see the sunset, sent tiny leaf bowls with marigolds and candles lit off into the river, saw the burning Ghats (where cremations take place), saw the ancient castles lining the river, then watched a Hindu fire ceremony celebrating Mother Ganga, the Ganges River.

Then on to another Tibetan ceremony in Sarnath, smaller with 3,000 monks and nuns, this one in particular for Tibet and the people of Tibet. Here, we served rice and dahl to lines of sopping monks and nuns in unexpected rain, visited the Dhamek Stupa in procession with candles in the rain, then another day we handed out 15,000 prayer wheels to the monks and nuns! That was a hubbub of bustling, pushing, all with laughter and hilarity, ending with a beautiful procession around the Dhamek Stupa, site of the Buddha’s first teaching.

We ended our trip in Kathmandu, Nepal, in an area near the Boudinath Stupa where many Tibetans live. Each morning and evening, hundreds of Tibetans come to circumambulate this monument that is so old (over 1,000 years), no one knows how old it is! We traveled a bit, seeing the country and the magnificent Himalayan range.

It was a magical trip of learning, beauty, poverty, giving and soaking in new culture and adventure! 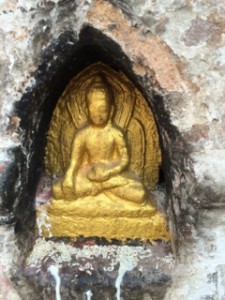